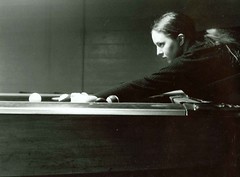 It’s been about 10 years since I took Black & White Photography at Watkins. I feel like I was fairly decent at it, or at least got more and more decent as the weeks went on. We had to take 2 rolls’ worth of shots each week, focusing on a given mission (low light shots, motion shots, etc.), and then we had to do the whole dark room / contact sheet / hand-print while standing over a bin of water thing in the lab. It was probably one of my favorite classes at Watkins, since it basically consisted of running around taking pictures and standing around in a mad scientist apron chatting with classmates. I had an eye for unsettling ways of cropping a picture, and I tended to go more for photography projects that mainly served to document bits of performance art, like dancing in odd places. (I also love performance art, and you should not start telling me how silly and pretentious that is unless you want to hear me try to convince you otherwise for an hour and then try to loan you some books.) My photography teacher briefly tried to get me to switch majors, but she and I both knew that I was not cut out for a life of photographing weddings and children and it’s terribly hard to pay for a house with oddly-cropped pictures of people staging their own deaths.

Not that the graphic design thing worked out much better, but the web development thing certainly did, and the market wouldn’t have had a chance to tell me I needed to build web sites instead of designing them if I hadn’t tried to design them and found out I wasn’t as good at it as my classmates. Graphic design sits in this weird space where there are SO MANY rules and yet you’re still expected to creatively solve a problem. It’s like…stealth rules. I would rather my rules be obvious. When I break the rules, I want Visual Studio to yell at me in the form of a squiggley red line or start throwing exceptions.

But so much development makes one’s brain so rulesy. Eventually, you start wanting to break rules. Do crazy shit. Take oddly-cropped pictures staging your own death. Take pictures that a lot of people would think are weird and shitty but that others find weird and interesting. Or maybe just some pictures that only YOU find interesting. Who cares. The ability to pay for my house does not depend on me taking pretty pictures, so I’m freed up to take strange, creepy, sometimes sucky ones. But I want them to be intentionally weird, not just a weird as a side effect of not actually knowing what I’m doing, so some review and learning is going to have to happen as I’ve forgotten almost everything.

Like my mom used to say, you have to crawl before you can walk, and you have to walk before you can stage your own death. OK, maybe she only said part of that, but you get the idea. That’s why I’m using my Martin Luther King Day holiday (we get this day off! work is awesome!) to review concepts like f-stop and ISO setting. To start memorizing which shutter speeds give which effects. To read the manual for my new camera and learn how to really use it.

If you want a job done weirdly, you have to do it yourself, and you should never trust anyone to stage your death for you.

One thought on “Learning to See”